Tualatin Overture – Notes from the Composer

Tualatin Overture by Arthur Breur. Performed by the Tualatin Valley Symphony on May 21, 2017.

When Maestro Mark Perlman suggested, in October 2016, that I could compose a piece for the Tualatin Valley Symphony for its May 2017 concert, the idea for the Tualatin Overture was born. I immediately—that minute—started working on the idea: a piece of symphonic music about and for the City of Tualatin. Before I was even home from the concert I had the start of a melody.

A technique I use to come up with ideas for melodies is to write the letters of a word or name out as musical notes. The scale goes A through G, but re-using each note for other letters of the alphabet, as shown below, provides a note for every letter.

Using this, the word “Tualatin” provided the following notes that I could use all or part of as ideas for a melody:

The main themes of this overture, representing the present and future of Tualatin are derived from these notes. In the other sections, I use notes that spell other names and words from the long story of Tualatin—stepping back through the past all the way into ancient history.

The Overture runs about 12 minutes in length and is divided into seven sections as follows:

1. Opening Fanfare & the “Spirit” of Tualatin

I open the Overture with an upbeat and syncopated fanfare, representing the optimism and enthusiasm that I experience regularly in my daily experiences in Tualatin. A compelling, “striving” melody follows, representing the City’s ongoing economic and physical growth (made apparent by a dynamic and growing Chamber of Commerce, and its active, forward-thinking, and accessible city government). This melody, after each repeat, is followed by a contrasting melody performed by single instruments—first by woodwinds, then by strings—representing the caring, committed individuals who make Tualatin’s community everything that it is.

Strolling around Tualatin Lake at the Commons on a bright Oregon summer evening, we see the hub of an active and vibrant community. Such well established institutions as Hayden’s Lakefront Grill share the neighborhood with some of Tualatin’s newest residents and businesses, like Allen Song and his family, proprietors of Izumi Steakhouse.

Continuing around the lake, we glimpse a bit of the depth of Tualatin’s history, the Winona Grange building, built in 1940. The Winona Grange was established in 1895 and has been active in Tualatin ever since. Not far away, the Tualatin Heritage Center is a store of knowledge in a historic building, with numerous books and materials about Tualatin’s history. There are far too many names and details going back over the past two hundred years to include all of them in one small section (or description) of this musical work. Names like Saarinen, Martinazzi, Sweek, Thompson, Boone (a descendant of Daniel Boone), and Galbreath. Some of these names I have worked into the melodies in this section.

Special thanks to Allen Song for supporting the overture, as well as representing how people still arrive in Tualatin and set down new roots!

3. The memory of the Tfalati…

Not far away, we can walk along the Tualatin River Greenway Trail and read the many educational displays—some built right into the pavement under our feet. Much of the information is about the native people who were here when, about 200 years ago, American pioneers started arriving in search of fur pelts. The Tfalati (rhymes with “quality”) and other tribes had inhabited this land for thousands of years.

The last member of the Tfalati tribe, Louis Kennoyer, died in 1937, but was interviewed about Tfalati music. The interviewer was particularly intrigued by one of his examples:

“It will be noticed immediately that the two women’s voices (they sing the main motif of the melody, in the upper octave) string out very nearly the same melody. … The very same remarks hold for the men’s voices, an octave below. They really amount to an accompaniment, or drone. “It is perfectly clear however that a great many Indian songs are built on a melody of two or four phrases, and that there is a tendency…to convert the confusion which arises naturally from a leaderless crowd, into a pleasing effect. Ever so many songs are built so that you may start (by mistake) the song afresh at the end of the third, bar, while the main body of the singers continue, thus producing what we call a ‘round,’ and yet nothing dissonant happens. This is probably due to the intervals that are most frequently used in Indian music of this type, viz., the second, the major third, and the perfect fifth, and less often the inverted third.”

The original melody I composed for this section (composed using the letters of the word “Tfalati”) is written using just those intervals, and is arranged as described above. The solo cello that starts the section represents the lone voice of Louis Kenneyor, remembering the Tfalati traditions. The “four part” arrangement follows in the strings, with the entire orchestra gradually joining in, taking us back to imagine times before the pioneers, times before Europeans came to the North American Continent, times when the land we now live in had entirely different cultures and languages. Gradually, the memory of the Tfalati takes us even farther back in time, to the first people to step foot here, and then to before even those footprints were made…

NOTE: I was very concerned about the issue of cultural appropriation when working to represent the Tfalati people in this work, but I could not exclude them from the composition. I contacted the Tribes of the Grand Ronde and asked if there was an authentic tune or melody that I could incorporate into the overture, so as not to create an ignorant parody. I was very graciously thanked for my intentions to include the Tfalati in the overture and informed that the Tribes do not grant rights for their music to be used out of context. Someone did suggest that I could leave a moment of silence in the overture, in memory of the Tfalati, but I felt that I had to represent them musically while also following the Tribes’ wishes. Ginny Mapes’ discovery of the article—including visual musical notation—about Tfalati melodic style and 4-part harmony allowed me to create an original orchestral composition that I believe respectfully represents the memory of a people.

As we step back into truly ancient history, the footprints here are no longer those made by humans. Now we hear the tread of the giant mammals of the Ice Age: mammoths, sloths, bison, horses… and mastodons. (Not far from the Lake at the Commons is the Tualatin Public Library, with a display of mastodon bones which were found close to where the Fred Meyer store is today).

My lighthearted music representing Mastodons and Megafauna (composed using the letters of those two words) starts with the slow step of an adult mastodon played by the timpani, followed by the quicker beat of a young mastodon as represented by low pizzicato strings. Soon we hear that it is an entire herd, and the French Horns make the calls of the adult mastodons as the trumpets represent the answers of their offspring.

Some mastodons likely witnessed—perhaps as the very last thing they ever saw!—the great Missoula Floods that swept 300-feet walls of water across the landscape, changing the very profile of the land.

The music at the start of this section paints the picture of what seems to be a normal day, fifteen thousand years ago. Hundreds of miles away, a glacial dam has collapsed, and I imagine that here, there might have been very little impression of what was about to happen. At first there would be just the feeling that something wasn’t right. Then a distant sound—or perhaps the rumbling of the ground itself—would draw attention to the end of the valley to the north, and the appearance of a wall of water nearly three hundred feet high approaching at 60 miles per hour or more. The immense flood would devastate and reshape the land, but would also bring rich topsoil and—floating in immense chunks of ice brought with the water from far away—huge boulders called “erratics” scattered around the area. I imagine that, after the floodwaters had passed, the only sound in the Tualatin Valley was the quiet drip of water.

6. It’s not just the boulders that are erratic…

It is a sunny morning after our evening stroll around the lake and along the Greenway Trail. Dew drips from the leaves, and along the river, birds begin to sing. We hear frogs call to each other, and see turtles slowly exploring the swirling river eddies. Joggers run by and dogs eagerly lead their people to the dog park. Not far away, the lake is active with people walking and enjoying the early sunshine, toddlers try to catch the protesting ducks, and people—some from far off and exotic places—wander aimlessly, led here by games on their cellphones. We might even see people setting up for the City’s festivals, that include food, fun, music, and… yes, even people paddling on the lake inside the shells of giant pumpkins!

Special thanks to Annette Saarinen for her support for the overture as well as for the words that inspired the opening—and the title—of this section.

The Overture nears its close with a reprise of the opening fanfare and the earlier melodies, but with what was previously solo instruments (representing individuals) now playing together in a great crescendo into the final fanfare and coda.

The coda includes a new counter-melody rising atop the “striving” melody. This final melody expresses the optimism and inspiration I see and feel in the City of Tualatin, and then—just at the moment that this melody reaches great and beautiful heights—the music takes one last quiet moment to celebrate individual effort before the entire orchestra shares in the final, triumphant harmony. 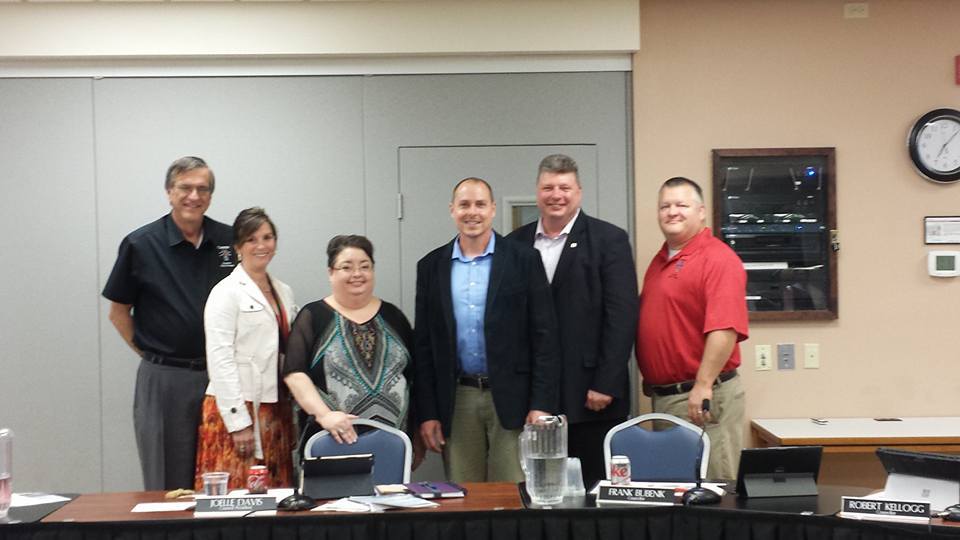 On June 26, 2017, the Tualatin Overture was proclaimed the official overture of the City of Tualatin by the Tualatin City Council.